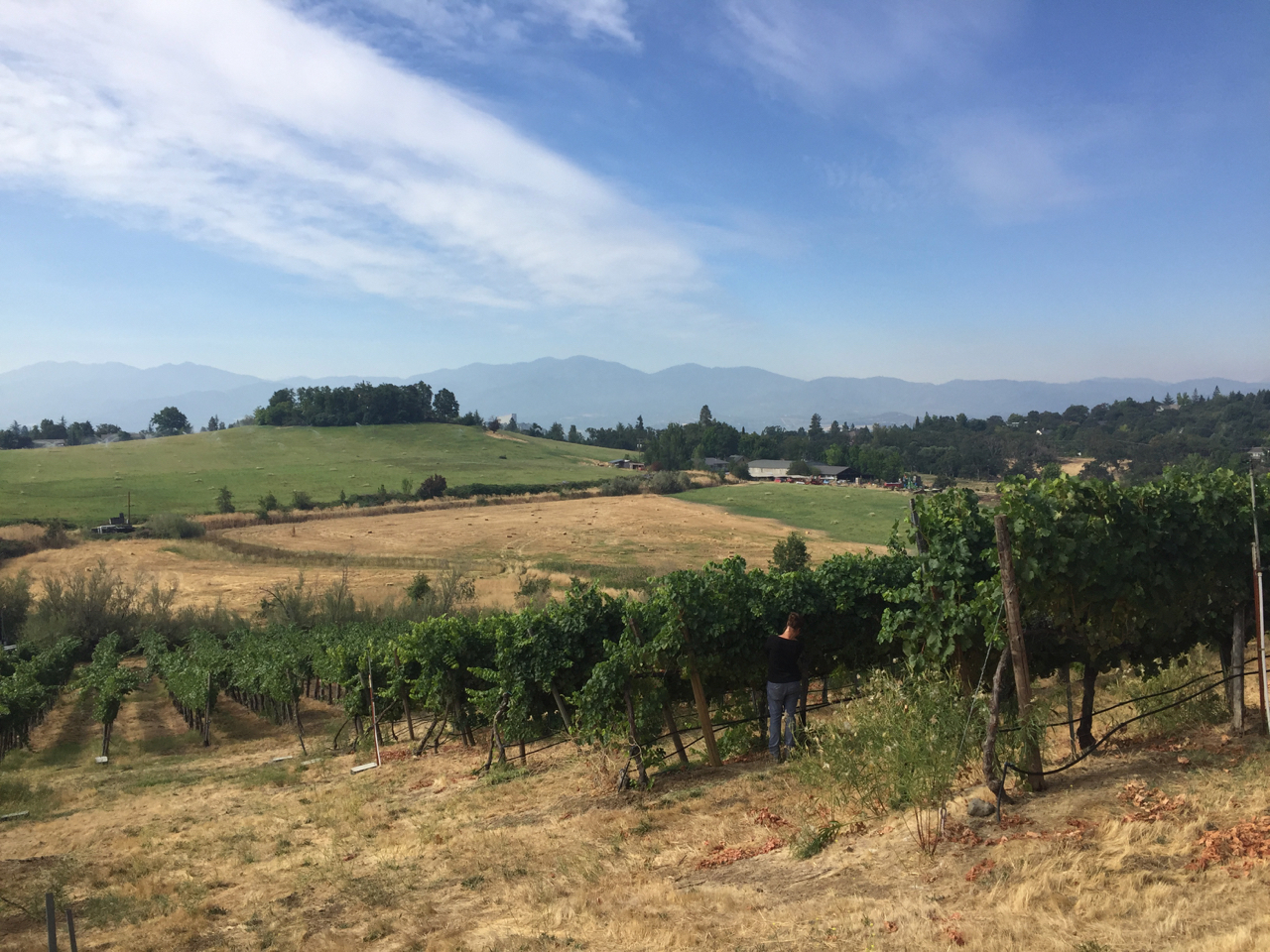 We’re back! Henri and I are alive and happy but have been busy. We signed up to start Wwoofing at a farm in Medford, Oregon during the summer and ended up staying two months with our hosts. Meanwhile, I got a new consulting gig that is keeping me busy three days a week. Everything combined left me with zero time for blogging. Now that we’ve left the farm for the San Francisco Bay Area after this rewarding experience, I wanted to talk a bit about what we did there and how it changed our perception about food and farming.

Dunbar Farms is a commercial (non-certified) organic farm located in the town of Medford, Southern Oregon. The farm is listed on WWOOF-USA. It’s not certified because it prefers “farming over bureaucracy”, but essentially everything is grown without pesticides, herbicides and chemicals. It’s one of the most diverse farms in Oregon. The farm isn’t working with a typical CSA business model; instead, there’s a farm stand and online orders are available by the pound. Locals come pick up their order at the farm every Friday.  They can hang out and enjoy a glass of wine with some locally-made pizza.

We helped out between 20 and 30 hours/week, harvesting, preparing orders, maintaining crops—and a cute vineyard— in exchange for a room in a little house, access to food and training in various areas (for example, we learned how to weld). The managers and everyone we met there were hard-working individuals who put a lot of energy and passion into the farm’s activity. As someone who was totally clueless about pretty much everything when it comes to growing and selling organic food, this 2-month stay was a big reality check.

I grew up in a country where the commerce of seeds is highly regulated. In France, only 3% of the seeds that exist can be sold legally. Originally, it was meant to protect farmers from being tricked by people with bad intentions, but nowadays it might be more like a proprietary patent system where some private actors make profit from the regulation and wouldn’t really want to give up on that. Fair enough, but no diversity on French plates.

For the 97% “non official” seeds, French farmers have to rely on swapping networks. As you can imagine, it doesn’t contribute to making the unlisted varieties popular in my home country. So I grew up with red-only tomatoes. orange-only carrots and very little vegetable diversity. At least, I grew up with vegetables.

What a pleasure to observe how things at Dunbar looked like! Green, purple, yellow tomatoes, white eggplants, pink potatoes… this is how the food on your plate should probably look like. And it tasted SO DAMN GOOD. Like, ten times better than every stupid New York grocery store red tomato I ever bought.

At Dunbar, crops were rotated regularly and many different varieties were grown. I didn’t count, but just for peppers there were at least 10 different kinds.

Organic food isn’t just a trend for hipsters and hippies. Processed food or stuff loaded with glyphosate and other crap will probably get you sick eventually. And even if some don’t buy the health factor yet—I reckon there’s an ongoing debate— nobody can deny the fact that intensive agriculture is really, really bad for our environment.

That being said, when growing organic food, you have to do many things by hand, like weeding. It’s incredibly time consuming and expensive.

What struck me the most working at a commercial organic farm is how thankless this work is compared to the value it brings in our lives. Even if organic food is in high demand these days, few people actually have knowledge around what it takes to get from nothing to a healthy, beautiful, pesticide-free carrot. And, surprise, not many people work at farms or farm for their own needs. The work is hard and doesn’t pay, and manual work is generally poorly considered in our cultures.

Unless you’re growing your own food, there’s no other way to acknowledge the hard work it represents for farmers, than to accept paying them for their hard work. But Americans only spend 6,4% of their household budget on food, a number that is incredibly small and tends to decrease. In France, this number goes up to 14% and decreases as well (it was over 30% in the 60’s). And of course, access to “good food” is still linked to social status.

I’ve been a dumb consumer for most of my life and it took me about ten years to start considering changing my food habits just a little bit. For me, moving to the US and being exposed to really, really horrible processed foods and cynical food culture was the trigger of my interest in food activism (things such as “Soylent” really give me the creeps). So I’m not blaming anyone, as I totally get why it’s hard. Here are just a few ideas to get started. I don’t even do this two-third of the time, but I’m trying to do it more and more.

Consider spending time cooking more instead of not cooking. Cooking isn’t actually very difficult and it can start with slicing a tomato. Consider cooking with seasonal vegetables and fruits.

Consider visiting your local farm stand instead of buying that tasteless grocery store tomato that traveled 5000+ miles in January.

Google the word “CSA” or “food co-op” and join one.

Consider growing some food if you have the space to do it.

If everything seems too expensive, try cutting down something that might actually be of secondary importance compared to food (Starbucks coffee is the usual cliché example).

Finally, thinking about all this while getting my hands dirty made me eventually use similar thinking when it comes to other aspects of life. When purchasing objects, for example a pair of shoes, I would try to buy something that is more expensive, but that is locally-made and will last.

That’s it, thanks for reading.

We’re in the SF Bay Area and we’ll stay around here for some time, so I’ll finally have time to get back on my weekly blogging habits 🙂

4 Replies to “Working at an Organic Farm in Oregon”