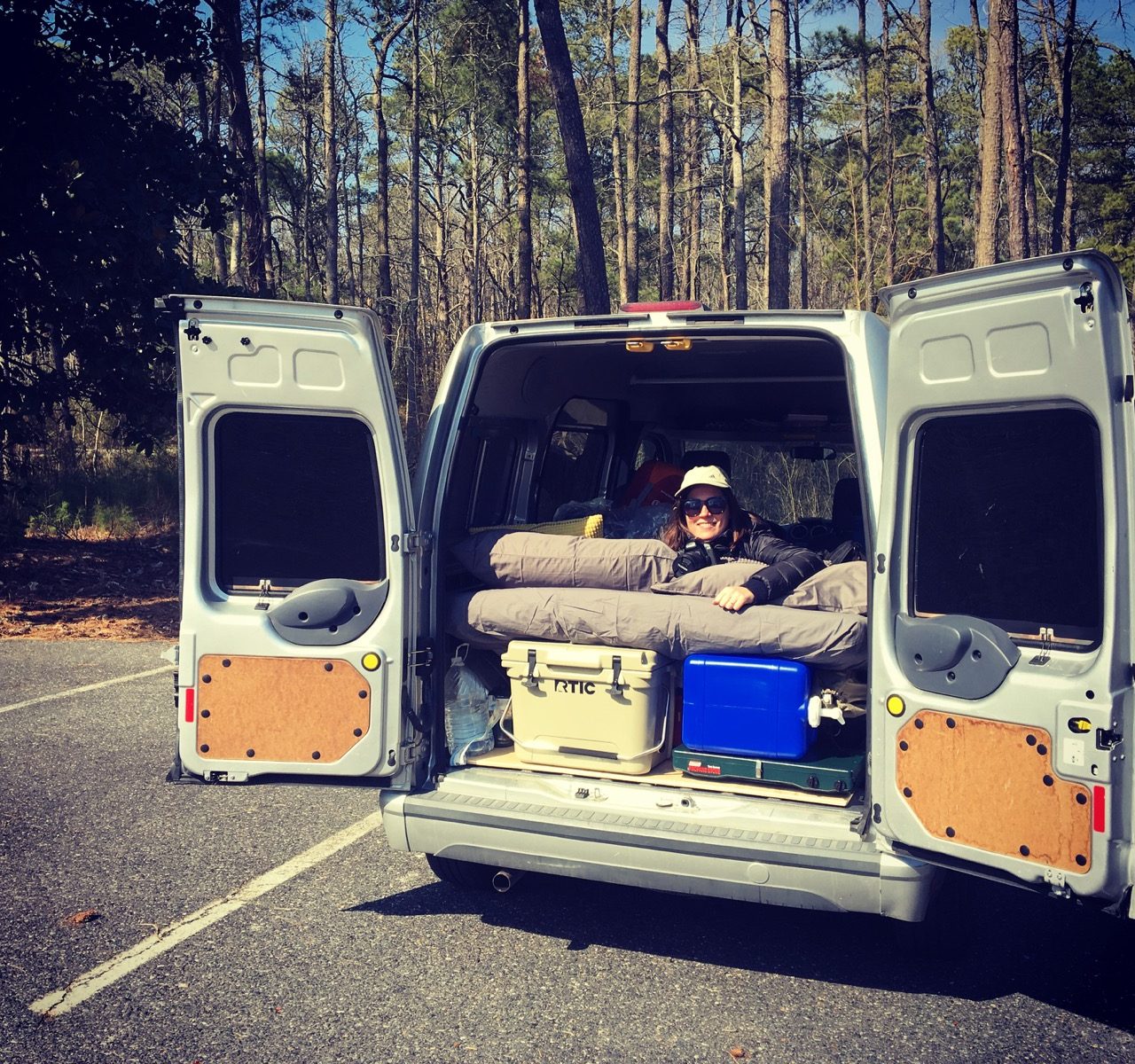 I’m hoping that this article will reflect the work and love we’ve put into our Ford Transit Connect camper conversion project. We converted our van in two weeks and with only 500$.

Advantages of a small cargo van

When we started researching van conversions, we found out about Nomads with a Van‘s project. Their Kia Sedona minivan conversion was inspiring but very minimalistic and we initially thought it was too “frugal” for us. We wanted a fully-equipped van like people have in Europe when they hit the road. We realized that “Eurovans” (such as Volkswagen Westfalia & Vanagons) and small RVs were not an easy option in the United States, as we would have to consider spending over US$ 20,000.

We then researched large vans commonly used for conversions, such as the Ford Econoline or GMC Safari. Again, we realized they would be over budget when it comes to the conversion. These also consume a lot of gas and are just too big for our driving skills.

So we went back to a more frugal car-to-camper conversion project. After all the minivan format was genius. It was going to give us much more freedom to move around, and after all you just need a bed if you’re following nice weather -the rest of the time being spent outside. We started looking for classic “Soccer Mom” cars (Grand Caravan, Nissan Pathfinder, etc.).

One day, we saw this yellow NYC cab parked in front of our building in Queens:

It’s a Ford Transit Connect. We both fell in love with this European looking car which looks very much like a Renault Kangoo. It is certainly not sexy, nor modern. Believe it or not, this car was designed in 2002. I think the designer was probably 75 years old already.  But we thought it was super cute.

After more research, we concluded that it was the perfect car for our need. Besides taxis, this car is typically convenient for people who need accessible transportation (= wheelchairs) or small businesses. There is a lot of headroom and the back is quite large for a 4-cylinder car. Henri is 6 feet tall and would fit inside. Finally, it’s gas-efficient: 22 to 27 mpg.

We found this beauty for sale in Poughkeepsie, NY:

2012, 75K miles. The owner was a blues musician who took it on a U.S. tour already, which was a good sign. We brought it back to NYC and converted it.

We started by removing the three back seats, which required purchasing special tools at Home Depot —you need a TORX screwdriver (about $20). Then, we put some plywood to use as a base. Plywood is very easy to customize and purchase at Home Depot (about $30).

For the bed, instead of  throwing out our house bed spring box from Overstock, we leveraged it to build a foundation and storage facility for the van. We unscrewed and rearranged the metallic parts in order to fit the size of the area (about the size of a full size bed), which was surprisingly easy -no welding or drilling was even needed. I think we got lucky on that one as the foundation was simply to re-arrange by just moving its different parts.

The foundation stays in place when the car is moving thanks to some metal brackets screwed to the plywood.

What we had in mind is that this foundation would be our storage space, through plastic boxes matching each compartment and accessible from each side of the vehicle (clothing: left door, toiletries: right door, food storage: back door).

We purchased boxes from four different stores (Ikea, Muji, Amazon, and another professional office furniture site – about $70 total) in order to fit each compartment with the exact dimensions and height we wanted. The boxes act as drawers, accessible from side doors and the back door.

There is just enough space left between the fondation and back doors to leave our cooler and water container.

We have wall storage on both sides, thanks to an Ikea hack of the SKUBB wall storage solution ($20) with Magnets from Home Depot ($10)

We also have overhead storage above the driver and passenger seats (we use it for games, stationary) and on each side of the front seats, just like in any car.

Once we were done with the storage part, we just threw a full Ikea Meistervik mattress ($220) on top of everything. It is one of Ikea’s thinest and lightest mattresses. We could have put more plywood on top of it to eventually support the mattress, but it wasn’t necessary.

A couple protections, sheets, sleeping bags, pillows… and that was pretty much it.

To create more darkness for a better sleep and privacy, we just used DIY Reflectix blinds ($20). When we left, we had not had time to figure out a proper solution. We initially used tape in order to hang the blinds, like in the picture below. It looked ugly and it was a pain to tape it everyday. We eventually improved it using permanent Velcro, which makes everything much easier and better-looking. Every van conversion I read about uses a lot of Velcro and Reflectix.

For additional privacy we also built a curtain that separates the driver area from the sleeping area. We simply did this with a rope and a $10 blackout curtain from Wal-Mart. On a previous picture you can see that we initially tried out a shower curtain rod, which just didn’t work out for us, it was falling down everyday.

YES, it is super cosy. We always sleep eight or nine hours straight and have no back problems or anything that might stop us from enjoying the adventure. I personally sleep much better than in our previous apartment in NYC (it mostly depends on where you are parked anyway). The storage solution has also been working out quite well. It’s a little annoying when we have to access our food storage, because we have to take the cooler outside first, but it’s not that annoying. I love the large side windows, they make waking up in the nature a very cool experience.

Why we skipped insulation

Our van conversion is of course not suitable for very cold or very hot climates, like an RV or insulated van would be. We haven’t worked on insulation at all. It’s also quite limited when it rains, as we have no living space. We once had to face long periods of rain in Michigan and felt rather limited with this van. So it will work perfectly if you stick to sunny areas and follow good weather.

It’s also a good fit for van dwellers who don’t mind relying on external facilities, from paid campsites for example. We probably use more paid campsites than people with larger vans, and we don’t feel comfortable using Wal-Mart parking lots with such a small van (especially as we need to cook outside). However, our camping costs have been very reasonable (as long as we keep jobs).

This Ford Transit Connect is easy to maintain. Even if it’s not a common vehicle in the US, we had no trouble finding parts that are easy to replace ourselves (e.g. air filter) in auto parts stores. It’s supposed to be known for transmission issues, but we never faced any -that being said the transmission had been replaced by the previous owner just before we bought the car. It’s really great in terms of gas consumption. The only pain is that it’s really slow in mountains. We avoid turning the A/C on while driving in mountains as it takes too much engine power. Being slow is really the least of our concern though.

We’re very happy we did not invest too much money and time in the conversion, because as travelers we are always outside, which we think is the point of traveling. Facilities (WC, showers…) have been very easy to find in the US. So far, this simple conversion has been working out really well for us.

Any questions about our Ford Transit Connect camper conversion? Let me know in comments, I’ll be happy to answer.