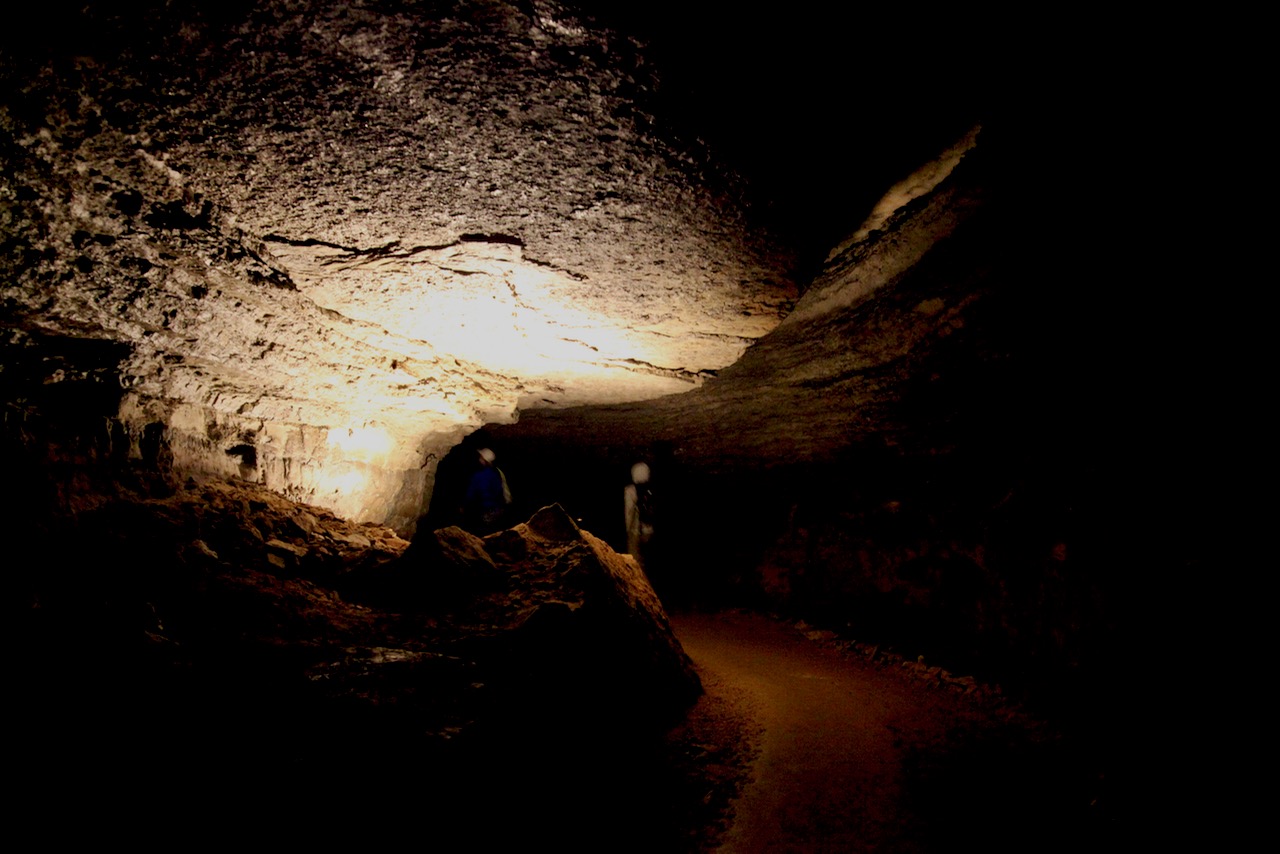 Last week, Henri and I took the Grand Avenue Tour at Mammoth Cave National Park, KY. Mammoth Cave National Park hosts the longest cave system in the world by far, with 400 miles of trails and passages. With such a huge underworld to discover, it is not a surprise that dozens of tours are proposed from very short & easy to very long & strenuous. Here is a review with pictures of the Grand Avenue Tour.

We took some time in order to compare all tours available.

All tours are guided by a Park Ranger. There is no way to visit the cave independently, unless you are a very experienced caver or don’t mind seeing only the cave entrance and a few steps with the $5 self-guided tour.

Tours are in English only and their availability depends on the season, so we had to check what was available during our visit. Shorter tours are simply portions contained in longer tours. They are also the easiest. All tours have a max. capacity and fill up quickly. Grand Avenue Tour seemed to be one of the tours allowing visitors to see the most of the cave: 4 miles, 4 hours, “strenuous” for $26 / person. We decided to go for this one, after hesitating a lot with the Historic Tour.

This map (visible at a booth inside the Visitor Center) shows where each tour goes. The dark blue trail on the second picture represents the portions of the cave visited with the Grand Avenue Tour. Unfortunately, one of the most famous sights at Mammoth Cave, the Bottomless pit, is not visible on the Grand Avenue Tour. The trade-off is that you see portions of the cave that are far less busy because not visited by other popular tours.

Grand Avenue Tour at Mammoth Cave: What to Expect

We started off at 9 am sharp at our meeting point behind the Visitor Center. There were about 70 other visitors. The tour started with a quick safety introduction from our Park Ranger. He had a very strong Kentucky accent and a loud voice that was very practical with such a large group. On all tours, it’s forbidden to:

After this intro, a 5-minute bus ride took us to the entrance of the cave.

The entrance  doesn’t really look like a black hole. It’s just a door with multiple steps to take in order to reach 150 feet underground. After a couple other reminders from the ranger to not touch anything inside the cave, we walked down for about five minutes until reaching a large corridor.

When you see the cave for the first time, it’s really staggering. Some might be disappointed because it’s not a typical cave with stalactites and stalagmites right from the beginning, as Mammoth Cave is mostly a dry cave. But the colors, the size, the light…are truly fantastic. I’ve visited a few caves in Europe, but nothing so dramatic.

The trail is made of sand, which was probably brought from outside as it’s the only thing that doesn’t look like limestone. The first mile of the hike is mostly flat, so the pace of the group was quite fast.

During the first couple stops, the ranger told us a lot about the discovery of the cave and the creation of the Mammoth Cave National Park, with many anecdotes and “jokes” referring to popular American culture. As a non-American, it was a bit difficult to follow, but since most of the visitors are locals it seems to please the majority. At some point I was impatient because I was more interested in learning a bit about geology than listening to a joke involving the Flintstones or a Midwest mother-in-law.

The trail then goes into some very narrow passages where we had to bend shoulders and watch our head a lot. I was sticking to the end of the group with the second Ranger so I could take some photographs.

My curiosity for geology was satisfied during the third stop, about halfway in the tour. At this point, the trail becomes steeper. The ranger gave a Geology 101 and explained how the cave was created. Spoiler: it involves billions of years and a lot of water.

Not long after that third stop, there was a first bathroom stop. Yes, they did build a restroom inside a cave. You know my fascination for public restroom availability in the U.S… And you know what? There is a SECOND bathroom stop near the end of the trail, it’s amazing!

The second half of the trail (miles 2 to 4) was far more difficult as it became a lot steeper, and we frequently had to hold a banister to get up and down. But it’s also the most dramatic landscape. I was sweating, but I would say that it’s just like regular exercise or a 2-hour easy mountain hike. However, one visitor felt dizzy at the end of the tour.

Near the end of the trail, the rangers completely switched off the lights after we all sat down inside a gigantic canyon. Everyone had to remain silent for a few seconds. It was a sensation of complete darkness and silence. It’s not scary because you know you’re safe, but if I had to be in this situation alone in the cave, that would be scary (have you seen The Descent?)

The very last part of the tour is “Frozen Niagara”. This part of the cave is “wet” and this is where you can see stalactites and stalagmites, both inside a pit and a corridor. They are truly photogenic.

The cave is all lighten up but you can’t use a tripod, stones as a tripod, flash. Intuitively I used a large aperture and high ISO. I wasted a lot of energy trying to photograph areas that were too dark, and most of my pictures ended up blurry, of course.

Still, I had a lot of fun and got a few decent shots that I wanted to save for this post. The lightning in the cave is truly spectacular and makes it easy for a beginner like me to play around.

Camping near Mammoth Cave : We camped at the Houchin Ferry Campground, a primitive campsite near the river (water and porta-potty only) about 25-minute drive from the Visitor Center ($12/night). Happy Caving!