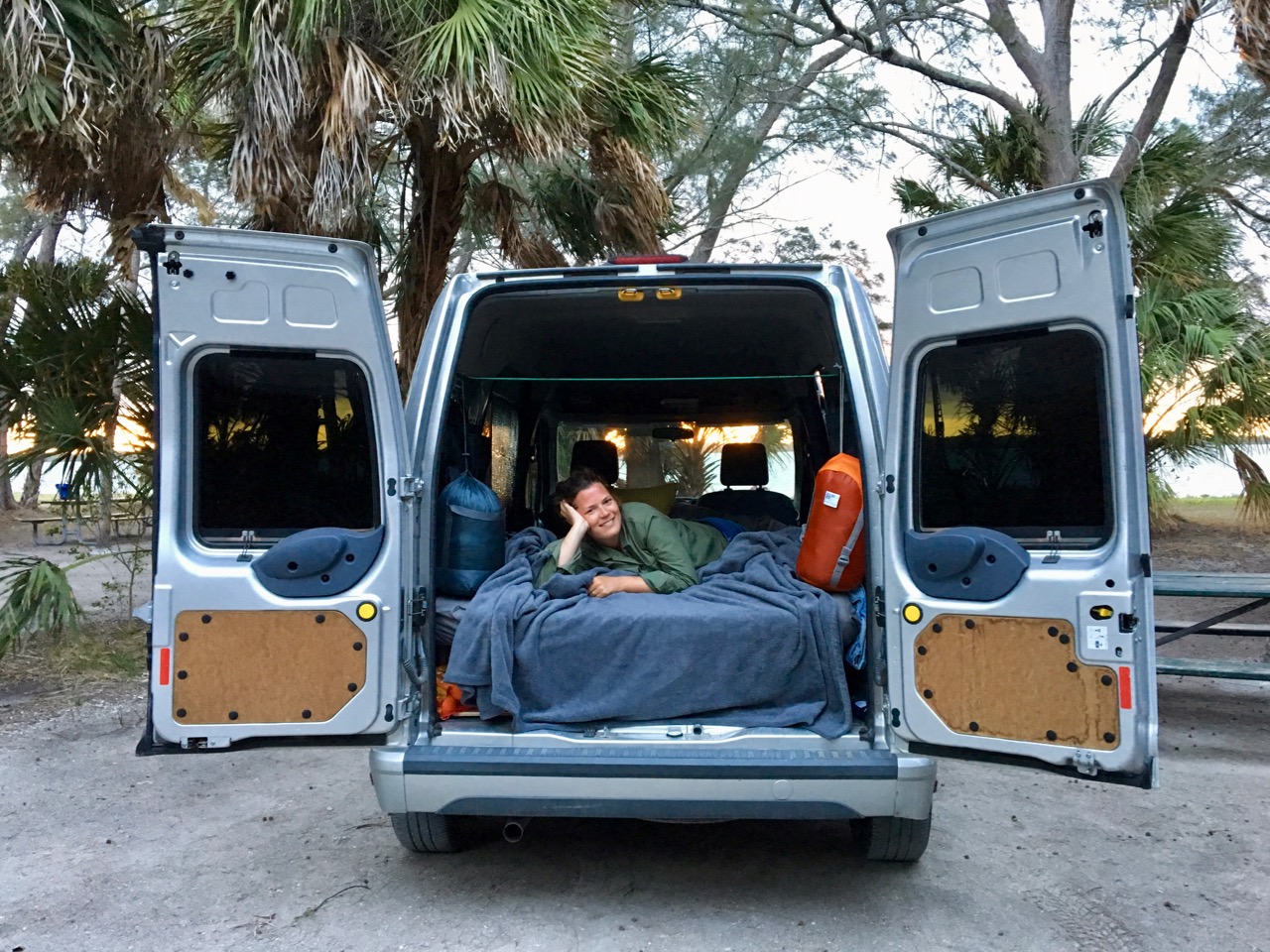 Three months ago, we left New York City to visit the U.S. with our Ford Transit Connect campervan. Now that we are happy digital nomads / vanlifers, it is a good time to compile everything we’ve learned on the road.

One positive aspect of “van life” in the U.S. is that you’re likely to encounter a lot of wild animals, sometimes directly on your campsite. Here is a list of animals we’ve crossed paths with (does not include the zillion birds): Alligators, Crocodiles, Deers, Snakes (Indigo Snake or Green Tree snakes), Raccoons, Tortoises, Armadillo, Frogs, Owls, Opossums… still looking for a Bob Cat. Do not feed them or get too close to them or something uncool will happen. Also: see “Raccoons”.

We tend to feel like drinking beer or wine every evening because living in a campsite with a campfire every day feels very much like barbecuing every day. It’s OK, you just need to know it’s a problem, and try to resist, or not.

The United States of America are a camper’s paradise. There are options for everyone and all kinds of taste: backcountry / wilderness camping, regular drive-in camping, swimming pool camping (K.O.A). If you’re opting for paid campsites, it’s very easy to find a place to park without any reservation. We use the “All Stays” app to find all the campsites in the area we’re visiting. Camping is really affordable in most cases (between $0 and $30 a night). There are many options for free campsites in National Forests that we sometimes use, but what we prefer is State Parks or private campground like K.O.A, as they usually offer some electricity and water which we need as we work part-time. We love camping in the U.S. and I’m really impressed by the quality of the infrastructure compared to Europe.

I tend to drive more just because I like it more than Henri. But I wouldn’t say it’s a pleasure and we try to never drive more than 3 hours a day. Since it’s a tradition to mock another country’s driving habits, here you go: what the heck, America?? I do not understand tailgating, which is common practice here and incredibly dangerous. People generally don’t care about the speed limit and do dangerous passing, especially in cities. For the rest, it’s fine, except for school buses. I wish I could drive a van across the U.S. without driving it myself. If Elon Musk is reading…

We do cook as much as possible with our 2-burner stove, with an occasional “MacDo” sometimes —that’s the way French people call Mc Donald’s, and just like any typical French person* I admit that I love it, but only once a month. We make a lot of couscous salads, sausages, healthy sandwiches, omelets, pasta dishes. We eat an unusual amount of Avocado, Lettuce, Oranges, Broccoli, Apples, Yogurts, Oignons, Sausages, Rice, Cheese, Bread and Roasted Chickens. This was pretty much our French diet, so no big change here. We do not have a fridge, so we have to refill our ice every three or four days. It’s annoying but ice is available everywhere.
* Did you know France is Mc Donald’s second market after the U.S.

It’s going to be really hard to make friends since we constantly move around and people with a similar lifestyle do move as well. If you fear solitude and lack of social life, this might not be a good lifestyle for you. Personally I use Messenger and WhatApp to reach out to my friends in NYC and Paris as frequently as I can. And I get to know my husband, of course.

Gasoline is very cheap in the U.S., we are  paying between $1.99 and $2.45 a gallon. If you travel full time, you will put a lot of miles on your car, so it’s good to have a great mpg. We drove 4000 miles in about 2 months! Download the Gas Buddy app to find cheapest gas stations around you. Gas stations are great in North America, coffee is good, restrooms are spotless clean and they sell everything you might need.

Maintaining a hobby while traveling is important. In other words I think it’s good to have something to focus on / a goal. Personally I decided to find new hobbies that were entirely embedded into traveling, like Photography, Swimming or Hiking. I can make progress in these three areas every day as we travel. I also do the blogging, I started reading the newspaper every day.

We have a Verizon unlimited plan and we’re so glad we decided to invest in this. We’ve had full coverage in crazy places like on a ferry in the middle of the sea. In order to work on the go, we just use our iPhones as wifi devices (tethering). Half of the time we do not have any coverage directly on our campsite, especially in State Parks, but if we need to work we just walk a few yards or drive a few miles to spend a few hours elsewhere. Verizon Unlimited is unlimited for real. We’ve never experienced slowdowns and we do use about 40 GB / month.

Our jobs are perfectly compatible with “van life”: Henri is a web developer working 100% online for loyal clients; I do some (boring) content evaluation / moderation work for a big Silicon Valley company with an entirely flexible schedule. I personally really had to switch my mindset regarding work, it is now just a way of making money for the purpose of this trip and nothing else. I will go back doing something professionally more rewarding when I feel like it, and I’m perfectly confortable with that / not scared about the future. Finding work is easy when you know what you want.

We really love kayaking, there are a zillion places to kayak in the U.S. and things you can only access with a boat.  Unfortunately renting one is not cheap. We think that having our own kayaks would be so great.

We do count how much we spend and try to maintain a budget, at least for accommodation. We spend about $40 to $80 day on average, all expenses and fun included, for both of us. We cover this by working online, so we haven’t used our cash savings yet or any credit. Overall, we’re really surprised that traveling here has been costing us twice as less as living permanently in New York City. However there is one important problematic area when you’re not traditionally employed in the U.S. (or even when you are): the lack of health insurance. Poor “health plans” in the U.S. cost more than $500-600 a month, which is ridiculous, so we didn’t sign up for that (we prefer to pay the ACA fine for not having coverage, as it’s much, much  cheaper, or fly back to France if the problem is not urgent). Travel Insurance is the only other option, but the conditions of activation in the U.S. are full of loopholes and exceptions.

We used them when it was cold. The best app to find motels is Priceline because they have the best special deals. A motel is usually $50 a night and not worth it vs. a good State park campground. That being said, I love motels and I think they’re part of the spirit of America. Our favorite chain is Extended Stay America.

When you do something as crazy as giving up your “amazing career in [name any huge expensive city]” at 30+ in order to travel all the time, other people will actually express different feelings. Most of the time people don’t care at all, or find it really cool and would like to do it themselves someday. If it’s your mom, she will be worried that you get injured and don’t find a job later. In very rare cases there is some light criticism like “this is really superficial and self-centric” which I can totally understand —it is indeed somewhat superficial and self-centric to live your life.

These wild animals are very cute but they are a major annoyance while camping. Trust me, when you’re from Europe, you do not think that a cute raccoon is going to come steal your food during the night. THEY DO and they’re everywhere. We were living in denial during our first couple nights out, and often woke up with what we started calling a “raccoon shit show”. And yes, they can open your cooler. So we just try not leaving anything outside anymore while we sleep.

RVs are “Recreational Vehicles” but we nicknamed them “Retired Visitors”. They are another kind of traveling community in the U.S., often white and used to be in the military. They’re usually friendly and have dogs, good to practice English small talk and to get tips about places. If you’re unlucky they’re meth addicts yelling at each other day and night (true experience).They know where France is, but not always. We love them but we really, really don’t understand why they need three cable TVs in their vehicles, with so much beautiful nature around them.

We get a hot shower everyday because we mostly stay in paid campsites, see Campsites. Otherwise, just like anything else, America is all about convenience so you can find showers in Truck stops or other places on the road.

Some vandwellers are static and mostly do this for the lifestyle. We mostly do this in order to travel and discover new places. Our goal is to fully explore at least 30 U.S. states. We are taking it very slowly though. We never drive more than three hours at a time and we would usually stop at a new spot for at least two nights. That means we drive only about 400 miles each week which is about one full gasoline load.

Never happens. In the vast majority of paid and free campsites we can leave our car open during the night and we know nothing will happen. We sometimes leave our stuff, including laptops unattended and nobody takes it or even cares. People are generally well-behaved in the U.S. If we had to do this in Europe for example, we would probably be more careful (pickpocketing is very common). The only thing that made us feel unsafe is the poor driving in certain areas, and staying in a motel in a really sketchy area in Virginia. We’re just a bit more selective for motels now.

Before we started this journey, I didn’t know that traveling in van was a “Social Media Movement”. In the U.S. there are people doing this on the weekends for the sake of posting pretty photos on Instagram. I honestly don’t identify that much with this “movement”, and it sometimes depresses me when everything, especially traveling, turns into a consumerist / self-centric trend. But it is fun to know it exists, and it’s nice to feel part of something slightly eccentric.

Let me get this straight, if you spend too much time in the U.S, you will gain an average of 10 pounds (I confirm). So if you live in the U.S. AND drive a car everyday, this will be even worse. The only solution is to move your body as much as possible. I found that hiking was the easiest way of exercising while traveling, as well as kayaking and swimming.

Traveling with a small, non-insulated van  is not compatible with extreme temperatures, so Henri and I are trying to stick to moderate climate. For example, we had to cancel our plans to spend  May in Louisiana and June in Texas, once we realized how difficult it was to sleep in Florida with temperatures above 90 Fahrenheit / 32 Celsius. We’re going to spend the summer up north instead.

Any ideas for my missing letters, let me know please!